After 2014 and 2015, Carl Stahl GmbH has received the coveted Bisnode credit rating certificate for the third year in a row. This is official confirmation that the current restructuring measures are leading the traditional Swabian company from Süßen directly into a successful future. This naturally also applies to all business partners, customers and suppliers. True to the motto: All good things come in threes. The most important goal of the restructuring of Carl Stahl that began in 2015 is to further increase quality and delivery performance - and thus to focus even more strongly on the specific needs of customers. The starting position for achieving these ambitious goals is extraordinarily good: Most business partners, customers and suppliers have appreciated the competence of the company for many years. And rightly so. This is confirmed once again by the Bisnode credit rating certificate, which Carl Stahl was again awarded in 2016 for its stable economic situation. New contracts awarded annually under the most stringent conditions Bisnode's credit rating certificate is issued annually under the strictest conditions. The calculation is based on the so-called creditworthiness index, a statistically determined value. It records in figures the risk of companies either becoming insolvent within the next 12 months or ceasing business operations completely without all creditors being paid. In this way, solvency is reliably documented and made transparent and comparable for business partners, customers and suppliers. Only if companies have consistently demonstrated a credit rating index of 1 over the past 12 months and their rating in the Bisnode database is stable and very good can they obtain the coveted Bisnode credit rating certificate. Companies such as Carl Stahl and their business partners, customers and suppliers benefit equally from meaningful, first-class data on the creditworthiness of currently more than 5.1 million German and over 235 million companies worldwide. Because a very good credit rating continues to be the best reference and the solid basis for long-term successful business relationships. Both today and tomorrow. 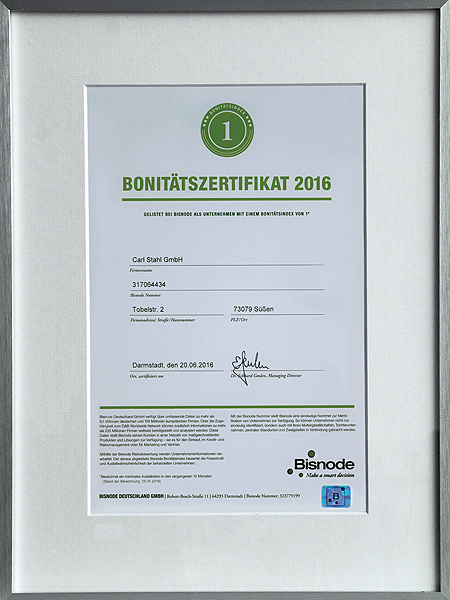